As Staycation 2016 draws to a close….time to reflect

OK a bit of a cheat’s post but I’m sure you’ll forgive me.

The above collage sums up Staycation 2016 – bare feet, coffee, cinnamon bagels, writing, some typing (yes, I’ve begun the typing marathon that will become Bonded Souls …eventually!), a couple of cocktails, some photography, some great live music and , of course, several pairs of Converse!

normal blog services will resume when my mind returns to the here and now…..it may be some time! #amwriting

images sourced via Google – credits to the owners 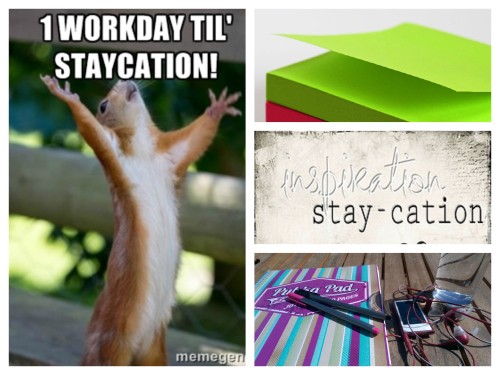 It’s reached that time of year again. It’s the eve of the start of my two week break from the salt mine.

In the run up to this long anticipated annual event, I invariably go into a “To Do List” frenzy. (I’m bad enough on a good day but it’s worse at Staycation time and all I would say is “run for cover” if I’m actually going on Vacation!…trust me on that!)

I’ve written before on here explaining that, without a ready supply of Post It notes, I’m lost! Seriously, I can’t fully function in either the work environment or my real/creative world without them.

When disaster struck in both worlds this week, I could’ve cried. Mid-list making, I ran out of Post Its! AGHHHH!!!!

The first part of the disaster struck early on Monday morning as I went to jot down a little aide memoir. No Post Its! Taking a deep breath, I reasoned with myself and calmly added Post Its to my weekly shopping list. Surely I could survive until Saturday without them?

I got to work a couple of hours later and, after my essential Starbucks kick start, began to plan ahead for the two weeks that I will be out of the office. Mid-morning, I reached for my trusty Post It pad to write two notes…AGHHH!  There was only ONE left! Cue second OCD panic of the day and it wasn’t even 10.30am!

I gave myself a stern talking to and went to the drawer where we keep the stationery….No Post Its!!! Still trying to maintain a calm demeanour and at least attempt to look like a sane fully functioning adult, I scurried to my own locker/drawer. In it lurks a plastic bag of odds and ends that used to fill the top drawer of my previous desk. (I never did get around to clearing it out and had just dumped the contents into a bag) Whew! Right at the bottom of the bag I found a small square of sticky note salvation.

That evening, I was working on Book Baby 3 and plotting out the remaining key scenes to be written (I’m not the most structured at planning before I start to write so Post Its form an essential part of the process)

EEK! No Post Its to jot down the key pieces of information. I soldiered on….twitching slightly.

So, since Tuesday, Staycation 2016 planning has been forging ahead.

The primary aim of the coming two weeks is to finally finish the first handwritten draft of Book Baby 3. I’ll be honest, much as I love my book baby, parts of this one have been a challenge. It’s been a bit of a slog but, following a few major changes, I’ve made good progress lately. Hopefully, two weeks will be enough to get it successfully to the end. (Crosses fingers and offer up a silent prayer to Ixchel, the Mayan goddess of creativity.)

Several Post Its have been used to note down various appointments that I’ve slotted into my Staycation schedule, including a caffeine fuelled catch up with an old school friend.

A sense of equilibrium has been restored and I can now look forward to a creative Staycation 2016…unless of course the Great Lord Camelot shines down on me on Saturday night, meaning I can actually make plans to go away for a few days in the sun.

Hero – who is yours and why?

A small social media frenzy over the past twenty four hours about a certain band’s new album listening party and subsequent announcement of the album’s title triggered thoughts of heroes.

Does everyone have a hero or heroes?

Is there a difference between a hero and an idol?

What does it take to be your hero?

As is my usual want, my research began with the tattered family dictionary.

Hero – a person, typically a man, who is admired for their courage, outstanding achievements or noble qualities.

Idol – a person who is a greatly admired or revered.

My next  approach was to ask some friends and family members who their heroes are and why. This threw up some interesting answers and cast doubt on the 21st Century hero being male.

Two friends, who shall remain nameless, said it was their grandmother, mother and sister. Their reasoning was also pretty similar – strong, independent women overcoming the challenges life’s flung in their paths and who live/lived life to the full. Hearing friends describe these “Wonder Women” was heart-warming to say the least.

Only one friend said their hero was their dad but qualified their answer in that, as they grew up, they realised he was “just a man.” This was a response that resonated with me but I’ll come back to that shortly.

One person named three high flying, high profile business men as their heroes. The likes of Richard Branson to name but one. The reason for choosing these three gentlemen in particular was because their success has brought employment to thousands of people. Admirable qualities without a doubt.

One of the folk I asked said their children were now their “little heroes” as they had “all won the race for life.” (Think I know what you mean, Four!) I hadn’t thought of my own kids in that vein but I can see where the train of thought has come from. With the current state of the world we live in, all of today’s children are tomorrow’s heroes!

One friend said her husband was her hero. That one made me smile.

Another friend claimed to be too cynical to have any heroes. Such cynicism from one so young!

So, how would I answer my own question?

Like the friend I mentioned earlier, who said their first hero was their dad, I’d have to agree. Several friends may just have fainted from shock at that comment! Up until a month ago, I’d have disputed it.

I recently found myself watching an audio visual presentation at the Royal West of Scotland Amateur Boat Club’s 150th Birthday Party and my emotional reaction took me by complete surprise. I was a mess!

My dad was a successful amateur oarsman in his day and seeing photos of him in his hey day along with the various crews brought back vivid childhood memories.

Many a  late Saturday afternoon was spent sitting on the front wall waiting to see if he’d come home from whatever regatta it was with more silver ware. I remember him and his friends attempting to set the world record for rowing the length of Loch Ness in 1976.  I remember waving him and his friends off on his epic 180 mile long row. In many ways these are bittersweet memories. Like my friend, as I grew up, I too realised that while he’s still my Dad he’s “just a man.” (He did take me to my first gig – Status Quo at the SECC Glasgow in 1986)

I swithered having read the dictionary definitions of hero and idol as to whether I’ve been answering this question incorrectly for years.

After some deliberation I’ve concluded that my answer is accurate. Despite my love of music, my hero is a sporting legend. He ticks all the boxes in the dictionary definition. Sadly he passed away in 2003 at the age of 52. He was greatly admired for his courage on many levels, especially the courage with which he returned to his sport after an horrendous accident in 1982. He left his sport in a far safer state than he joined it, having campaigned tirelessly for years for safety improvements and even, on occasion, improved toilet facilities! He was a household name, a “cheeky chappy” with an astute business mind. A family man at heart.

I could wax lyrical all day but I won’t. If you want to learn more about him then this link is a fair place to start https://en.wikipedia.org/wiki/Barry_Sheene

Yes, I have my musical idols, past and present, and countless other people whom I greatly admire for their various attributes, including some of the friends I quizzed earlier today, but my answer to the question remains the same as it has done for over thirty- five years. Barry Sheene.

So who is your hero and why?

(images sourced via Google- credits to the owners)