As my sanity finally slips out of my grasp….

Any of you who either know me in person or who follow my blog ramblings will by now be aware that my grasp on what’s left of my sanity can be tenuous at times.

Lunchtime strolls along the waterfront walkway in front of the “salt mine” are the perfect place to clear your head and, depending on the direction of the wind, to blow away the cobwebs. Many of the photos I take and subsequently post to Facebook are taken during these sojourns. A lunchtime walk needs two vital pieces of technology- my phone and my iPod. (If I forget my iPod, my phone can double up as both at a push.)

One day last week I took a photo of a one legged seagull perched on the railings. I had seen this bird around a few times. At first I had thought it had curled its other leg up as they are prone to doing but, no, this poor wee soul only has one leg. (Maybe I’ve taken this walk too often when I’m recognising the local seabirds on sight.) Anyway, the stark white of its plumage against the grey river scape set a good scene for my photographic efforts for the day.

Happy with the end result, I duly posted it to Facebook.

It generated a few “likes” and comments, one of which sparked my curiosity. A friend commented, “Did you know those can live up to age 30!”

Cynic and doubter than I am at times, I turned to Google and Wiki for confirmation. He was quite correct, with the oldest gull, a Herring gull, having a confirmed aged of 49.

Satisfied that I had learned something, I put all thoughts of the photo and the average age of seabirds to the back of my mind.

Until that was the next day. It had been a long stressful morning for a multitude of reasons that I won’t bore you with. Suffice to say, by midday my mind was fried, my caffeine levels were off the scale and I was on the verge of tears.  Phone and iPod in hand, I set off along my usual route, slowly unwinding as I listened to the not-so gentle strains of my music. Step by step; song by song I began to pull myself to together. By the time I turned into the path leading back towards the front door of the “salt mine”, I was as calm and collected as I was likely to get.

And then it happened!

A large seagull was walking along the path beside me. I stopped walking. We stared at each other intently for a few moments then my grasp on my sanity slipped out of reach as I found myself thinking, “I wonder how old you are?” 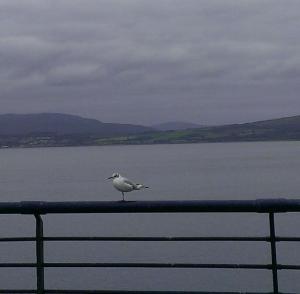 This entry was posted in Uncategorized. Bookmark the permalink.

2 responses to “As my sanity finally slips out of my grasp….”